I Want to Ride My Bicycle: Cycling in Vienna 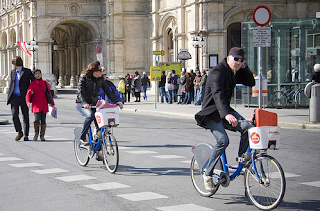 Vienna is incredibly bicycle-friendly city. It has around thousand miles of bicycle tracks, which are very useful when getting from A to B. In addition, it also has a free city bicycle scheme, although the word free is not completely accurate. There are some great Austrian zimmers that are bicycle friendly too.

The city's bicycle scheme allows you to hire a bike at an extremely low rate. The first hour is free, the next hour is a euro, the third hour is charged at two euros, and anything between four and 120 hours is charged at four euros an hour. It is worth mentioning that this is per cycling session. Therefore, if you use the service for a half hour trip and return it, you will not get charged no matter how many trips like this you make. The journey begins when you remove the citybike from its slot and ends when you plug it back into a slot, even if this is at a different station. You will need either a debit card or a citybike tourist card, which can be rented from your hotel. Make sure you ask about it. There may be a small fee of around two euros a day to hire a citybike tourist card.

There are approximately 80 public rental stations in Vienna, and the terminals are normally located near major transportation routes, such as tram, bus, and rail stations, and near major tourist areas, such as the Imperial Palace and the Ringstrasse.

It is also worth checking out the guided cycle tours in Vienna. Most of these run between 1 May and 31 October, and there is often a nominal charge for these. For more information, it's worth going to the tourist information center at Albertinaplatz. Alternatively, your pension may have more information.

If the rain started coming down, you can always do a little traveling underground. We don't mean, of course, that you start tunneling like a mole. The Viennese Metro allows bicycles on it after the morning rush hour, which generally ends at 9 AM on weekdays, until 3 PM. Trains after 6:30 PM also allow bicycles. Saturdays and Sundays are generally unrestricted.

Cycling in Vienna is a fantastic opportunity that's not to be missed. The ease of cycling makes this one of the most bicycle-friendly cities in the world. The free bicycle scheme is a great way for tourists to get around Vienna, and it keeps you fit, too!
Posted by Yuval Harari at 11:50 AM

Welcome to my blog! My name is Yuval and I love to travel. I especially love Austria. I lived in Vienna and Salzburg for many years. I am pleased to give you my tips and general info on Austria. Visit my website at: www.AustrianZimmers.com and also please view some photos on Pinterest by clicking here.
Questions? Comments? Business? austrianzimmers@gmail.com